The Sacramento Bee reports that a California hospital denied a transgender man a hysterectomy on religious grounds:

Tuesday was supposed to be a big day for Evan Michael Minton. The Fair Oaks resident packed his bags for the hospital, said a prayer and counted down the hours until he would undergo the hysterectomy that would take him one step further in his transition from female to male.

Instead he spent the day on the phone with doctors and lawyers after Mercy San Juan hospital in Carmichael abruptly canceled the procedure on religious grounds.

The surgery, part of Minton’s transition to a fully male body, had been scheduled for three weeks but was called off Monday as hospital officials were preparing his admissions paperwork. …

The hospital, part of the Dignity Health chain, said the procedure goes against its anti-sterilization policies, which are based on ethical and religious directives issued in 2009 by the U.S. Conference of Catholic Bishops.

In a statement, Dignity Health, which until 2012 was affiliated with the Roman Catholic Church, declined to discuss Minton’s case, citing patient privacy laws.

The American Civil Liberties Union and MergerWatch this week released reports that reveal that one in six hospital beds in the United States is in a facility that complies with Catholic Directives that prohibit a range of reproductive health care services even when a woman’s life or health is in jeopardy. In some states, more than 40 percent of all hospital beds are in a Catholic facility, leaving entire regions without any option for certain reproductive health care.

For the full ACLU report, which features testimony from medical experts and personal stories from women who were denied care at Catholic hospitals, visit: https://www.aclu.org/healthcaredenied 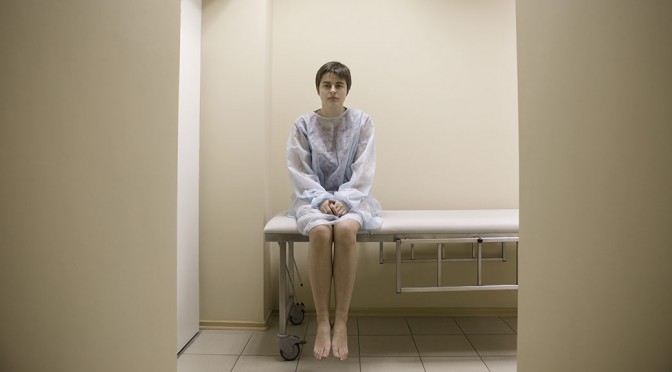 We come to our nation’s hospitals when we’re at our most vulnerable, in our times of greatest need. But many of our hospitals are owned by churches, which limit medical care based on religious doctrines. This keeps patients from the care they need, stops doctors from doing their jobs, and even threatens – and sometimes takes – patients’ lives. We come to hospitals to save our lives, not our souls.

Who Owns Your Hospitals?

While most Americans receive emergency care at public or otherwise secular hospitals, a great many receive care at hospitals run by religious groups. In particular, Catholic hospitals provide care for at least 1 in 6 patients in the United States and are, collectively, the largest not-for-profit health care provider in the country.

Over the past several years, a wave of proposed and completed mergers between secular and Roman Catholic hospitals has increased the number of Americans who will have to rely on a religious hospital for their health care. Several states have already seen mergers, including Illinois, Kentucky, and Pennsylvania. More recently, mergers have been proposed in Washington and Ohio (the latter of which is in the process of an anti-trust lawsuit).

Since these hospitals are barred by church doctrine from performing many procedures, this means putting at risk individuals’ health, as well of the health of society generally.

The Consequence of Religious Control of Hospitals

Catholic health care providers are bound by the Ethical and Religious Directives for Catholic Health Care Services, a document issued by the U.S. Conference of Catholic Bishops that governs how their health care providers must handle a variety of issues. As this document reads: “The professional-patient relationship is never separated, then, from the Catholic identity of the health care institution.”

This poses a severe challenge to many people seeking to exercise their legal rights to health care, especially reproductive and end-of-life care (physician-assisted suicide is legal in Washington state). Catholic hospitals regularly refuse to perform abortions necessary to prevent serious complications or save a pregnant woman’s life, and refuse to respect the wishes of patients regarding their wishes on how to die.

It also poses a challenge to employees who might feel compelled to provide emergency care barred by the Directives, at risk of losing their jobs. For instance, in 2011 a Catholic nun in Arizona was excommunicated following her decision to approve an emergency abortion necessary to save the life of the mother, who was 11 weeks pregnant at the time.

Yet Catholic hospitals do not simply refrain from offering certain kinds of care – they also often refuse to provide accurate guidance on where patients can receive the care they need. Under the Directives, doctors are barred from telling a patient with a nonviable pregnancy that there are other options available elsewhere. This denial of both care and information is particularly problematic in areas where other hospitals are not located nearby.

Lastly, Catholic hospitals present problems for LGBT patients, who might be denied hormone therapy, or the basic right of married same-sex partners to be treated as next of kin in making health care decisions.

Ensuring All Health Services Are Provided

As Seattle Times columnist Danny Westerneat wrote, “To get public funding, religious hospitals ought to be urged to abide by the public’s health-care principles as much as possible. Not us by theirs. We’d never let the schools be ruled by a church, no matter how well-meaning. With our health care we’re halfway there.”

It is not inherently problematic for a hospital to be affiliated in some way with a religious group. Not all religious groups demand hospitals deny certain services based on religious dogma; some actually ensure their patients can access a full range of quality health care services.

However, religious control of hospitals and their guidelines regarding which health care to provide, and how to provide it, often effectively strips people of their rights to control their bodies – whether it relates to reproductive care, end of life issues, or LGBT concerns. Neither politicians nor churches should dictate individuals’ decisions over their health care. Health care should remain safe and secular.