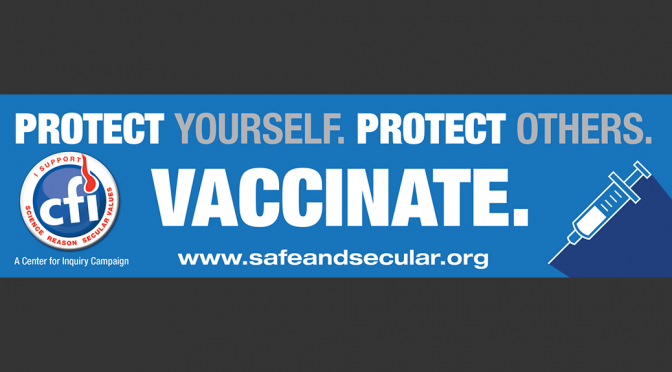 Measles is back. The virus was considered eradicated from the United States in the year 2000, but now that disproven theories of a link between vaccines and autism, and baseless fears about “toxins” have run rampant—spread by celebrity conspiracy theorists and irresponsible media—we now see the highest number of measles cases in two decades, with 644 cases in 2014 and over 100 new cases since the start of 2015 alone. Even diseases like whooping cough are at their highest level in over 50 years.

It’s not even safe to take your kids to Disneyland anymore!

Here’s your chance to show your support for science-based medicine, and to help stop the spread of preventable diseases by spreading the truth about vaccines. As part of our Keep Health Care Safe and Secular campaign we’re offering free campaign stickers  that say, simply and proudly:

Protect Yourself. Protect Others. Vaccinate.

And we want to send you two of them. One for you, and one you can give to a friend.

Vaccinating isn’t merely about a “personal choice” as some politicians have recently suggested. It’s about confronting the reality of being a human being living among other humans. Getting yourself and your children vaccinated against preventable diseases means that others who can’t get vaccinated—because they’re too young, pregnant, sick, or elderly—are also protected.

When we vaccinate we’re not only doing something good for our own health, but for our family’s, our children’s, and our neighbor’s health too.

So help make the case! Let’s get the word out that all of us who can be vaccinated should be vaccinated. And let’s see if we can make this crucial fact…contagious.

Sign up now: you’ll get updates and advocacy emails from CFI’s Office of Public Policy—and get both of your free stickers too!(Maybe it will go viral! Okay, sorry.)

Due to your overwhelming support for this cause we have run out of stickers! Please check back soon for more information about how to acquire a “VACCINATE” sticker.

Keep Health Care Safe and Secular is a campaign by the Center for Inquiry in support of health policies that are based on evidence and scientific principles, rather than superstition, magical thinking, religious beliefs, or conspiracy theories. The campaign aims to educate the public, the media, and policy makers about the threat to our health care posed by misinformation, dogma, and quackery, whether it comes in the form of science-rejecting “faith healing” or dubious alternative and “natural” medicine. Learn more at SafeandSecular.org.

In order to receive alerts related to the Keep Health Care Safe and Secular campaign, please make sure the “CFI Office of Public Policy Alerts” box is checked when selecting which emails to receive.

Do you believe that your ability to access health care services has been restricted based on religion or pseudoscience? Are you aware of any attempts to inject religious dogma or beliefs unsupported by evidence into health care debates and policies? Do you have an idea for a social and/or political action that could be taken locally to promote and defend access to health care?

Please tell us about it! We advocate in a variety of ways to protect individuals’ right to access safe and secular health care, but without reports from people like you, many important cases and opportunities for action can slip through the cracks. We need to hear from you!

To report an issue, please provide the following information and press “Send.” We will respond to your message as soon as possible.

Thank you for helping the campaign to keep health care safe and secular!

We at the Center for Inquiry are doing all we can to educate the public, policy makers, and the media about the importance of safe and secular health care and the threats we face, but we can only do so much. It’s crucial that you take part, and act to promote and defend safe and evidence-based health care.

On this page you will find a collection of different ways that you can take action on each of this campaign’s issues—from contacting political leaders to helping raise public awareness. In order to show that we are a unified and strong constituency, make sure you mention the Center for Inquiry and the Keep Health Care Safe and Secular campaign in all of your communications!

How to Track State and Federal Bills

The first step toward getting involved in and affecting the policymaking process is to know about proposed legislation. Here’s how you can track bills proposed at the state and federal levels.

We recommend that you check the Center for Inquiry’s Bills We’re Tracking page. Our Office of Public Policy will send an action alert on each measure if and when it comes up for a vote. 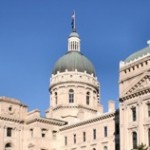 For tracking state-level legislation, we recommend using Open States. Users can search both pending and recently voted on legislation in their respective states based on keywords, lawmakers, and a number of other functions. Users can also register and receive email updates legislation, as well as committee and individual official actions. 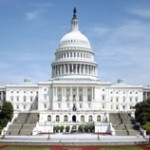 For tracking federal-level legislation (in the U.S. House and Senate), we recommend GovTrack. As with Open States, users can search both pending and recently voted on legislation based on keywords, lawmakers, and a number of other functions. Users can also register and receive email updates on legislation, as well as committee and individual official actions.

On both state and federal issues, we also recommend users sign up for email alerts from their elected officials, as well as follow them on Facebook on Twitter. This is a good way to learn which specific issues your elected officials care about.

How to Speak out on State and Federal Bills

Now that you know the kind of legislation proposed in your state or in Congress, it’s time to let your elected officials know what you think. Here’s how to best contact them about political issues.

The easiest way to take action is through action alerts. Action alerts allow you to quickly fill out a pre-written form letter that is sent directly to your state or federal official. You can sign up to receive action alerts from CFI here. We also recommend that you sign up for action alerts from organizations such as Americans United for Separation of Church and State, the American Civil Liberties Union, Planned Parenthood, NARAL, and other groups that advocate for safe and secular health care.

When your state lawmakers or Congress is set to vote on a bill, one of the most effective ways to voice your opinion is tocall them on the phone. You can find both your local and federal elected officials’ phone numbers by visiting Common Cause. Here’s a handy tip sheet on how to call your elected officials.

Another easy and effective way to share your opinion, whether in regards to a specific vote or a broader issue, is to send your elected officials an email. Your message doesn’t need to be long; in fact, a few sentences are more than enough. The longer the email, the better the chances most of it will be ignored. Here’s a tip sheet on how to send an email to your elected officials.

Request a Meeting With Your Elected Officials

For most legislative issues, action alerts, phone calls, and emails will suffice. However, in-person meetings can have a powerful impact. This section will help you figure out how and when to try to schedule an in-person meeting.

Generally, in-person meetings are best suited for having broader, larger, and longer discussions with the elected official’s staff regarding either basic introductions, or the complexities of a specific legislative issue.

We recommend that people try to arrange a small group of 3-5 people who care about health care issues to schedule an in-person meeting with their elected official’s staff to introduce themselves, and their reasons for concern on any number of health care issues. Here’s a tip sheet on how to request and carry out meetings with your elected officials.

Many of the issues and stories in this campaign have not garnered local, national, or international media attention. We need to change that. How? Here are a couple of ideas:

The interests who want health care decided by religious belief and pseudoscience aren’t waiting. It’s going to take all of us to keep health care safe and secular. Get active today!

Need assistance? Email us at opp@centerforinquiry.net.

Health care is critical for leading a productive, fulfilling life. There are various barriers to receiving appropriate health care, some of them economic in nature. But even when these economic barriers are overcome, the delivery of appropriate health care is too often obstructed or denied by policies, practices, and beliefs that incorporate religious doctrines or pseudoscience.

The harmful influence of religion and pseudoscience on our health care is manifested in many different areas, affecting individuals in every age group. Commonplace and proven medical procedures and treatments are being withheld, and dangerous alternative medicines pushed onto patients without restrictions. Individuals are being denied the right to control what happens to their bodies, whether it’s in the context of decisions about reproduction or end-of-life care. That’s why we at the Center for Inquiry are launching Keep Health Care Safe And Secular, a campaign to fight on every necessary level to ensure that health care decisions are made on scientific grounds, and not based on religion, mere “tradition,” or magical thinking.

The attacks on our basic health care rights are diverse, relentless, and growing. Here are just some of the areas of our lives being adversely affected:

What can be done in the face of this assault? The Center for Inquiry believes that these impediments to essential health care services must be challenged at every turn. That is the purpose of the campaign – to Keep Health Care Safe and Secular.

With the support of people like you, CFI has already covered an enormous amount of ground, and we will continue and expand our efforts.

What can you do? Get involved. Explore the campaign’s web page, and contact us to see how you can help us make a difference. Tell us stories of how religious extremism or pseudoscience has impacted health care for you and your family. And please give generously to help fund this campaign. Together we can stand up to these attacks on health care, and together we can win. We can succeed in keeping health care safe and secular.